When Dr Campolattaro mentioned if I would like to join a group of ophthalmologists on their mission to save sight in the Dominican republic, the first thing I did was look up DR on the map. I knew it was somewhere in the Caribbean and below Cuba. Now, the only two things that I knew about Cuba were Cuban cigars and Fidel Castro, and I knew even lesser about the Dominican Republic.


The Voluntary health Program was started 20 years back by the Della Rocco family, and joined by a dedicated group of friends and volunteers which grows with every passing year, they have been able to make substantial difference to the impoverished in Santiago, Dominican Republic. In a perfect synergy between the local and the foreign, they carry out an almost seamless partnership with ILAC the institute of latin American concern in Santiago. It is in the verdant greenery of the ILAC gated complex which houses fully equipped operating rooms, warehouse to store the medicines and such, lovely little casitas as lodging for the volunteers. The ILAC center teaches a few locals about health , farming and these locals, known as cooperadors inturn are responsible for a certain population of the community. These cooperadors are esponsible for screening the community for those who might benefit from the various medical missions.

The VHP deals with ophthalmic conditions such as refractive corrections, cataracts, oculoplasty conditions and strabismus. I joined the group as a strabismologist and a paediatric ophthalmologist.


Packets and packets of prescription glasses were neatly labelled according to power and size, ready to be given to the patients. For those whose power was not available, got their prescription made in the USA and shipped to Santiago in 2 months time.

The generosity of spirit was not restricted to medical supplies. There were boxes upon boxes of second hand soft toys and every child took home a bunny or a teddy, or even the friendly 8 armed octopus. Mary Jane, who reminded me of Miss Marple from the Agatha Christie novels, was the quintessential granny to everyone who visited her in the pharmacy. Along with eye drops she gave out packets of M n M's because we all know sometimes chocolate heals what no medical prescription can. And if that wasn't enough we topped up the prescription in our Paediatric clinics with lollipops and stickers for our cute little patients.

There was a sense of Joie de Vivre even in the Pre operation room, where Dr Nelson held court.The patients sat in a colourful room playing and colouring and singing songs before they got wheeled into surgery. Even as every patient entered the OR, they got a rousing welcome from the ophthal technicians with cheers and claps. This was the most surprising part of the mission for me. Coming from India, I had never seen such an atmosphere in a hospital setting. I was so inspired that I hope to replicate t back home in India, and I hope a few of my Indian doctor colleagues follow suit.


Some where along the line, I realised that I was at a unique position to help these people. Coming from a developing nation myself, and having worked extensively with the financially incapable I was able to provide cheaper alternatives. A mother said she had discontinued patching because of unavailability of patches in Santiago, as well as the cost (even in India, a single patch costs 20 rupees); to make the treatment modality sustainable, I taught her how to make simple inexpensive patches at home. There were a lot of patients we had to turn away by the last few days of the mission because of inability to operate all under general anaesthesia. In india, I operate on young adults above the age of 18 under local anaesthesia, and sometimes even children as young as 14 under local and what we like to call ‘vocal anaesthesia’ of calming the child with soothing words. Every patient operated under local  anaesthesia, would have freed the anaesthesiologist to take up a younger child under GA.

In India we have a term called ‘jugaad’ which means innovation born out of necessity and frugality. It is this innate skill to try and do everything at the least cost possible which helped Indian scientists launch the successful mission to Mars at a much less cost than NASA, and I feel a few 'jugaad' would help make VHP even more cost effective and thus more sustainable.

Even more surprising to me was that I learnt a lot about cost effectiveness, and Jugaad from my American counterparts. Back home I, like many of my strabismologists trained at Aravind Eye, operated using a microscope. At the Dominican republic I operated using magnifying loupes, and even presbyopic glasses! These magnifying loupes, if used back home would allow me to take my surgical skills to the interiors of villages, also free up a microscope which could be used for intraocular surgeries. I have the wonderfully patient staff from NYEE to thank while I got comfortable with a new surgical technique.

In 1999, I represented India in a UNICEF sponsored congress in Hawaii, as a 14 year old, it was my first tryst with altruism. I got a grant from netaid and UNDP to start free immunisation for children back in India, what we called “MAP: millennium action plan” you can read the CNN coverage of the same " here ". In the 17 years since then, I felt like I had come full circle with the mission to Santiago.I had always harboured a desire to work with Doctors without Borders and ORBIS ; foundations which combined my twin passions of travelling and medicine into a 'travelling doctor'.

I went half way around the world to a place I knew scarcely anything about, and a place I may never visit again, but the Bachata music still rings in my ears, the memories still glows in all their technicolour brilliance, and I met some amazing and wonderful people whom I hope to meet again sometime. 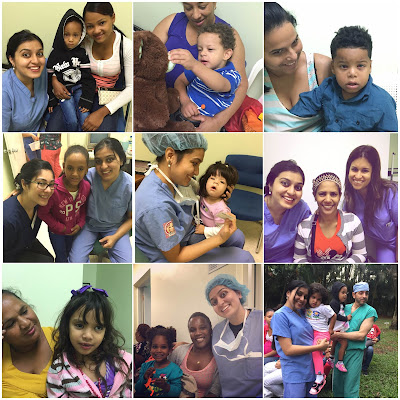 to learn more about ILAC : https://www.creighton.edu/ministry/ilac/ilacmission/mission/