August 04, 2016
It is one year to my "birth-day" and snippets of the year gone by are buzzing in my head like bees in a bonnet. the moods are in swing too; nostalgia, funny times, magical moments, and just general gratitude for the year that was.

a few random thoughts that I have right now;

Masterchef Australia: In the last few weeks of pregnancy, Masterchef Australia season 7 was what kept my evenings occupied , it was showing on star world Premier at the time. and on the night of the grand finale I had to check into the hospital, now even though it was a very nice hospital, with almost all channels, since star world premier was a channel one had to specially subscribe to, it wasn't available in my hospital room. that evening while they checked for the fetal movements, little shreyu was kicking away too fast for the nurses comfort, she wanted to recheck the movements in an hour, what I did tell her is that he moved this fast every night, what I didn't tell her was that the food and the cooking on television might have been the reason. Next morning my brother called, and the first question I asked him was who won? and he said "Billy and it was epic!" a year down the line, as little shreyu sleeps, I see Masterchef season 8 on my hotstar app from the comfort of my bed, right next to him, and with my earphones. no television sets required, not even the lights in the room. Things are the same and yet so different.

The boy: For my baby shower on the 3 of May 2015, i bought two foil balloons online, a blue baby boy shaped balloon and a baby girl shaped balloon. since we didn't know if it was a boy or a girl. months later when Shreyu was born on 5 August 2015 , my inlaws said that even though the girl shaped balloon had deflated, the baby boy balloon was still the same! Over time they tried to deflate the balloon , but somehow it would not deflate. Now it has been more than a year, and exactly a year since my baby boy has been born, and we still have 'the boy' balloon just the same, without ever having filled air in it! to be honest, now I am getting superstitious about it; it's like a horcrux from Harry Potter, or maybe the balloon and Shreysht have a past life connection. 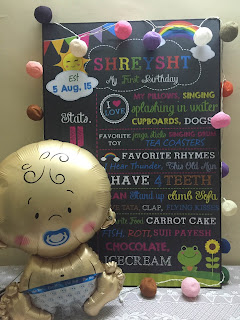 There are so many more floating thoughts, which I will pen down subsequently.. but right now I have balloons to blow, and cakes to bake, and streamers toput before I sleep.

September 16, 2019
This year will be the 11 th Birthday retrospect;it is a promise I keep to myself, where I write my thoughts on growing a year older. I started writing a birthday retrospect on my 25th birthday and this year being my 35th birthday post. (read last years post  BR 2018 )
This year went by in a blur –and I was happy about it. Earlier, my reaction used to be, “ Oh my God! This week went by so fast, where did the time go?” , but this year I couldn’t wait for the months to roll by. I was in a WHY IS LIFE TAKING SO MUCH TIME TO PASS BY mode . Ah! I can feel that a lot of people reading this are going to be surprised by this. Because I have always been someone plugging my day with many things to do, I was someone who was a ‘go getter’ kind of person, so much to do in life, so much to see in life, the girl with the biggest FOMO or Fear of missing out. This year I had flipped completely to the opposite spectrum. I didn’t want to do anything new. It wasn’t like I was demeaning the act of disco…
6 comments
Read more

June 16, 2015
A few days back a close friend of mine received a gift. A large box wrapped in purple gift wrapping, ribbons and all, with a note saying “thank you doctor, from the Martins family” * (name changed to protect privacy)
A sweet gesture which a few patients still followed. A token of gratitude apart from the fees they paid and the medical bills. The medical profession has been subjected to major mud slinging in the past few years and small gestures of gratitude and appreciation mean a lot to us trying to do the best we possibly can.
But this gift was different.
“your patients must really like you.” I said, especially since I knew that many of his patients considered him family, and would get him fruits from their gardens, home made wines or cakes for Christmas, sweets on Diwali.
“the patient died. She had terminal cancer, there wasn’t much that I could do. I didn’t want to take the gift, but the family insisted…” he replied
The doctor patient relationship is a tenuous one. The giver and …
13 comments
Read more